Last month was the United Nations’ World Oceans Day, kicking off a global initiative to call on world leaders to protect 30% of oceans by 2030. Innovation for sustainable oceans is a key theme this year, which is why it is so timely to be talking about cleantech in this arena. Cleantech Group (CTG) recently  discussed this topic (and other Nature-Based Solutions), in detail with innovators, corporates and investors at their 17 June edition of Cleantech Interactive.

The Value of Oceans

Oceans cover more than 70% of the earth’s surface and produce half the world’s oxygen.  Every second breath you take originates from the ocean. We also rely on these vast bodies of water for numerous ecosystem services, including:

Every year, oceans provide $2.5 trillion worth of value and support 200 million jobs. Based on gross marine products, the ocean is the seventh largest economy in the world.

Yet, marine ecosystems represent some of the most heavily exploited ecosystems on the planet. Human threats like plastic pollution, acidification, climate change and destructive fishing practices combine to threaten this critical natural resource. In the wake of Covid-19, many fear an acceleration of plastic pollution as masks, gloves and hand sanitizer bottles have already been seen littering the ocean and beaches. These items can take up to 450 years to degrade.

The blue economy represents all economic activities related to our oceans which are not only sustainable but actively good for our oceans. This radical approach is being adopted across the world, highlighting economic opportunities while assigning a greater value to oceans.

Innovators across the globe are developing business models in the blue economy, models which include protecting, monitoring and learning about our oceans, as well as sustainably removing its resources and promoting biodiversity. In the past 12 months, CTG has monitored investments totalling over $25 million over 12 deals. Most of these investments have been seed stage or grants, highlighting the early stages of this ecosystem as well as the importance of accelerators like the Sustainable Ocean Alliance, Plug and Play Tech Centre and Elemental Excelerator in their development. Most of these investments are for ocean exploration technologies, such as autonomous vessels or underwater drones, representing the global drive to better understand these vast resources. 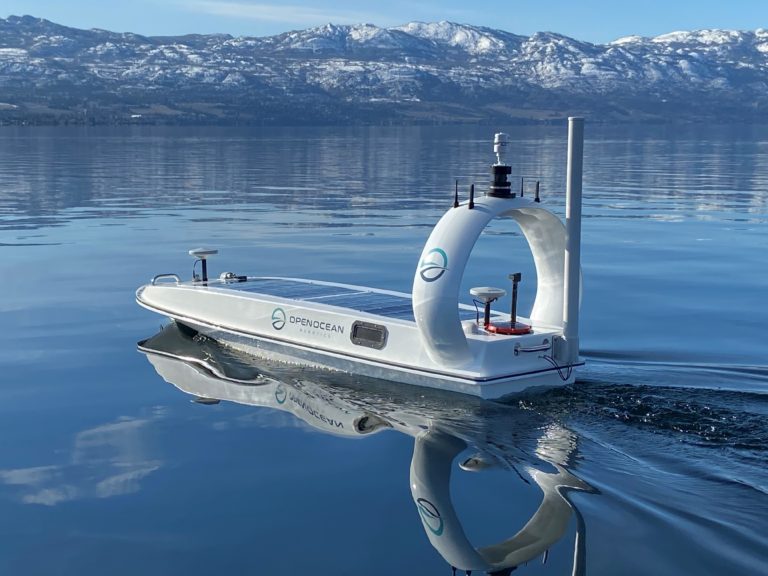 “Now is the best time to be innovating in sustainable ocean technology,” explains Julie Angus of Open Ocean Robotics. Husband and wife co-founders, Julie and Colin Angus, have developed a solar powered ocean drone, also called an uncrewed surface vehicle (USV). The USVs can travel for months at a time, using only the sun to monitor and collect ocean data. One of their first pilot projects has been to map the sea floor for the Canadian coastguard for navigation and rescue.CTG recently spoke to Julie, who outlined their business model. “We sell our vessels, run mission services and have future plans to be a data and ocean analytics company. With USVs, it is important to have flexibility. Each of these markets are not huge on their own so in order to generate high revenues, you need to be able to go after multiple markets. Also, each client has different data needs.” The company closed a pre-seed round of $400,000 in January this year and is preparing for a seed round in Q4 2020 or Q1 2021.

Companies are emerging to protect and restore our oceans. The Ocean Cleanup, the developer of a vessel that removes plastic and non-biodegradable waste from oceans, received a $1 million grant in May this year. The grant was from the Benioff Ocean Initiative and Coca-Cola and will support the deployment of The Ocean Cleanup’s Interceptor vessel at Kingston Harbor, Jamaica. Coral Vita has developed a commercial coral farming model which is geared to be a viable means to restore degraded reefs at large-scale. Half the world’s coral reefs are dead and over 90% are on track to die by 2050. This is not just an ecological tragedy but a socio-economic catastrophe, as conservatives estimates indicate that reefs generate $30 billion annually while sustaining 25% of marine life and the livelihoods of up to one billion people. The company uses breakthrough science to grow corals up to 50 times faster while strengthening their resilience to climate change threats. They then finance operations by selling reef restoration as a service to customers dependent on coral reefs’ valuable ecosystem services and by operating their farms as eco-tourism attractions and education centres.In October 2019, Coral Vita was selected to the second cohort of the Ocean Solutions Accelerator, run by the Sustainable Ocean Alliance. They are currently raising $2 million to expand their Grand Bahama facility into the largest coral farm in the world, capable of growing 100,000 corals per year. CTG spoke to Coral Vita’s co-founder Sam Teicher who said “In the future we plan to operate coral farms in every nation with reefs around the world, each capable of growing one million or more corals per year. In doing so, we not only aim to preserve coral reefs and the communities that depend on them, but further galvanize the growth of a restoration economy to protect ecosystems and the development of other coastal resilience technologies.”Sam also recently spoke at our  Cleantech Interactive, Investing in Nature  on 17 June.

Another collection of promising blue economy innovators are those focused on sustainable fishing. One such innovator is SafetyNet Technologies, the developer of an underwater light that functions to reduce bycatch by 90%. Bycatch represents the millions of unwanted fish caught during commercial fishing. The light, called Pisces, can be attached to fishing nets to deter certain fish and attract others. CTG spoke to Daniel Watson, co-founder of SafetyNet Technologies, who said, “The biggest driver for our technology is regulatory change. The European Union’s Common Fisheries Policy means fishing boats are checked more regularly and fined for bycatch. Our solution mitigates against this. It’s important to highlight that fishing crews don’t want bycatch. So, for example, if a fishing boat had the average of 20% of its cargo hold full of the wrong type of fish – that’s a potential 20% decrease in profit margin.”

Remora has developed fish tracking and tracing technologies which help fishing communities in Costa Rica prove their fish are responsibly sourced and as a result, those fisheries can charge a premium for their produce.

Emerging innovation and technologies in the blue economy are broad and varied, however most are early stage with little competition. The corporates that are investing in the blue economy are mostly those contributing to plastic pollution, such as the fast-moving consumer goods (FMCG) companies like Coca-Cola or Proctor & Gamble.

Technologies to transform the fishing industry face more competition with multiple methods to reduce bycatch and for fish traceability. Daniel Watson, from SafetyNet,  outlines, “The many tools that exist range in price, size and complexity. Our direct competitors are working with sound to deter fish. Most solutions are, however, expensive, and it is important to offer affordable price points to be able to scale from artisan to industrial fisheries.”

Julie Angus at Open Ocean Robotics describes the competitive environment for Autonomous Ocean Data (AOD) collection as complimentary. “There are three main types of vessel: one is USVs,  like us, the second are unmanned underwater vehicles (UUVs), which are like submarines collecting underwater data,  and the third are buoys, which are stationary, collecting data from one spot. Each has benefits and disadvantages, but preferably we would have all three to monitor as the task of monitoring the ocean is vast.”

Keep an Eye on…

The rise in global sea-levels has increased. Between 1993 and 2018, the ocean rose an average of 3.2mm per year, but in the last five years this has been 4.8 mm per year. Meanwhile, coastal construction is also on the rise. This has opened markets for coastal surveillance, monitoring (using sensors, geospatial and satellite data) and risk analytics. As a result, the market for coastal surveillance alone is growing at a CAGR of 2.3%, expected to reach $3.1 billion by 2024, from $2.75 billion in 2019.

For more on Investing in Nature, have a read of our most recent report.

This article was originally published by the Cleantech Group. Read the original post here.

Do you like this article? Share it with your friends!
Previous article
View all news (378)
Next article