If you are a woman living in a remote village in Africa, you could be spending up to three hours a day fetching water for your family. Maybe your children would come along to help you, missing school. The water you would get from a local pond or well would be dirty, making your children sick. But since the only alternative, water for sale brought from afar, is unaffordable, you would have no choice but to continue.

This situation is typical for many poor communities around the world suffering from water scarcity. One of them is the village of Efoetsy in Madagascar. Located on the dry South-Western coast of the island, it gets less than 400 mm of rain per year. The villagers survive by farming, fishing, and picking fruit and vegetables. However, even this lifestyle is becoming difficult to maintain due to droughts and water scarcity.

Years ago, Dutch engineer Sid Vollebregt was on a trip in Madagascar and was struck by the suffering he saw caused by lack of access to freshwater. Back in the Netherlands, he decided to do something about it.

About 70 percent of the Earth’s surface is covered by water, but most of it is saline. According to the National Geographic, only 2.5 percent of all water on our planet is fresh, and only 1 percent of that is easily accessible (the rest is in snow and glaciers). Most of this freshwater needs to be purified to be safe for human consumption.

With a rapidly growing population, it is no surprise that millions of people in the world do not have access to safe drinking water. Experts estimate that about 4 billion people, or two-thirds of the world’s population, experience “severe water scarcity” for at least a month of a year. Half a billion people experience it all year round.

Lack of access to safe freshwater creates or contributes to a host of problems. The most obvious one is disease. People who do not have access to safe drinking water have to get their water from unreliable sources, which often makes them sick. The World Health Organization (WHO) estimates that at least 2 billion people globally drink water from sources contaminated with feces.

Another problem is that people, often women and girls, must travel long distances to get to these water sources. This takes time that could have been spent studying (for children) or working, thus trapping communities in a cycle of poverty. Women and girls are also in danger of being attacked during these long walks.

Many communities facing water scarcity do have access to an abundant water source – the sea. Seawater is not suitable for human consumption, but a solution does exist: desalination.

Desalination is the process of removing salt from seawater, making it drinkable. This is done either by boiling the water and collecting the vapor (thermal) or by pushing it through special filters (membrane). The problem is that this process requires vast amounts of energy, making it unaffordable for impoverished communities and exacerbating climate change. Still, the world’s growing population and the demand for potable water mean that the market for desalinated water is expected to grow, at about 9% per year in the next five years, according to one estimate.

Back in the Netherlands, Vollebregt enlisted his friend and fellow engineering student Reinoud Feenstra to work on developing a desalination technology powered by renewable energy.

The result was a system that relies on solar or other renewable energy to treat water, thus making desalination carbon-free. This makes it both much more affordable and sustainable. The engineers founded a company to help spread their invention, called Elemental Water Makers.

The company’s award-winning patented technology provides off-grid solar-powered desalination to communities experiencing water scarcity around the world. It is used both by private businesses, such as island resorts, and communities, such as the one in Madagascar. 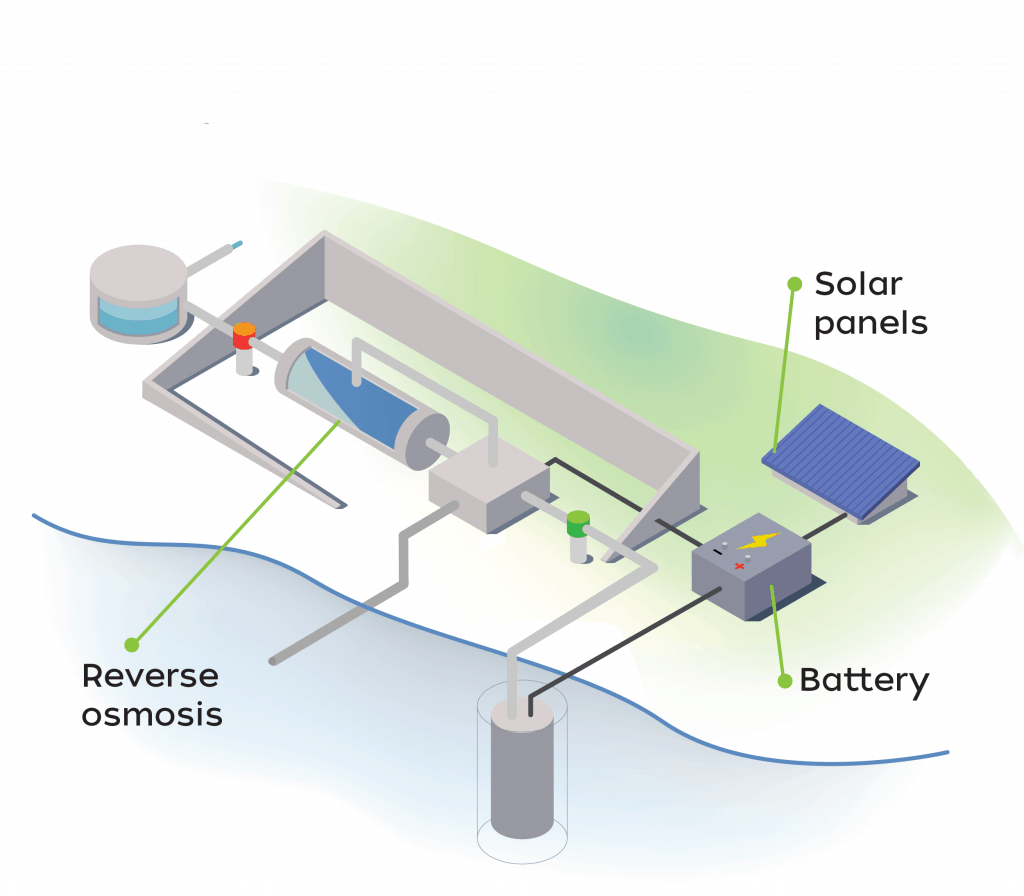 For all the life-changing potential of desalination technology, there are usually two key concerns about it. One is energy – traditional desalination uses a lot of it, thus contributing to the vicious cycle of energy use, leading to climate change, leading to or exacerbating water scarcity. Solar desalination breaks this vicious cycle, creating a carbon-free source of freshwater.

The other concern is brine. Brine, the byproduct of desalination, is highly concentrated salt water. It is usually pumped back into the sea and, because of its high concentration, is damaging to the marine ecosystem. The technology used by Elemental Water Makers addresses this by applying a low recovery ratio to the seawater – meaning that the brine is only slightly saltier than the original seawater. Additionally, because of the small scale of the projects, there is no single dumping spot with a high concentration of pollution. Having many small-scale projects instead of a few large ones not only minimizes the impact on the marine ecosystem but also increases resilience.

Now Elemental Water Makers has brought its technology to Madagascar. Through the Elemental Water Foundation, its charity arm, and supported by several non-profit organizations, the company has just built an off-grid solar desalination plant in the village of Efoetsy. The plant produces 15,000 liters of safe drinking water per day and employs local workers to maintain it and sell the water. A 20-liter jerrycan produced by the plant costs 80 percent less than one brought in from afar, making it affordable. This means women and children do not need to spend hours fetching water anymore, focusing instead on school, home, or work. And because the water is safe to drink, the community will be much healthier. All with the power of the sea and sun.