Throughout recent years, pioneers have been working on disruptive technologies in propulsion engineering. Recent successes with electric propulsion and hydrogen seem to be the driving force for modern and sustainable aviation. Although this shift faces numerous challenges, these pioneers are gaining credibility. The big industry players are responding to these trends by launching large-scale innovation projects – with governments supporting them politically and financially, creating a dynamic for change. What are those innovations ? What are the advantages and the limits ? What did we already achieve ?

Since the introduction of jet engines more than 80 years ago, the aviation industry has undergone spectacular innovation – yet the fundamentals have stayed the same. Today, the aeronautics industry needs to reinvent itself as it faces critical challenges. The industry contributes 2% of worldwide CO2 emissions and must lower its environmental impact in order to respond to evolving consumer demands and regulation. Up until now, aviation has had a fragmented approach to tackling this challenge and now more drastic measures must be implemented. Here is what could be the future of aviation.

Electric planes are no new invention having participated in aviation circles since the 1970s. For decades, these planes were experimental devices with little range and almost zero payload. In recent years, the number of electric aircraft projects has exploded (Roland Berger) and thanks to the innovations cited below, commercial-electric flights appear imminent. 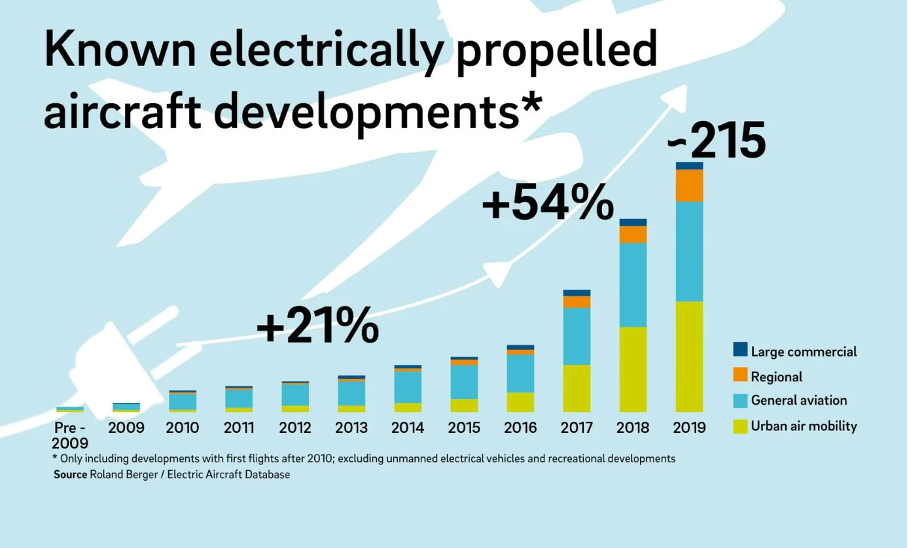 The main advantage of battery-powered electric propulsion is its minimal impact on the environment. With zero flight emissions, this is by far the cleanest way to operate an aircraft. Not yet entirely clean however, as the manufacturing and recycling of batteries must be factored into the overall impact assessment. Another prominent advantage of electric propulsion is that it is quasi-silent. This presents a strategic advantage to combat noise pollution which over recent years has become a legitimate environmental issue in airports. These factors begin to explain why manufacturers and pioneers are pushing electric aviation to the forefront.

Since 2016, electrically propelled aircraft projects have begun to flourish. Originally, these planes lacked functionality due to their battery-induced weight inbalance – often reaching maximum weight with one pilot, and having an airborne capacity of only a few minutes. However, there has recently been a shift in battery technology. Thanks to innovations borrowed from the automotive industry, the power of batteries has increased significantly to allow up to an hour-long flight. Battery manufacturers have improved their power-to-weight ratio (power delivered divided by weight), charging time and increased the autonomy of the aircraft on the whole.

With consistent innovation becoming the norm, the number of electric flights has boomed since 2019. In less than 18 months : H55 flew a BRM Aero equipped with its EPS (Electric Propulsion System) in June 2019. Ampaire flew a Cessna 337 with a hybrid engine in June 2019. Magnix flew a commercial Beaver from Harbour Air (Canada) in December 2019 – then flew a Cessna Caravan in may 2020. The shift can be shown through the size of the aircrafts. In June 2020, The aircraft manufacturer Pipistrel received EASA (European Union Aviation Safety Agency) type certification for the battery-powered Velis Electro, the very first electric aircraft certified in the world. Easyjet have also decided to initiate the development of their short-haul commercial-electric flights in partnership with Wright Electric. Electric commercial flights now seem attainable.

Whilst recent trends show intermittent progress in the aviation industry, there has been a seismic shift in credibility for electric propulsion and battery-power. The industry now recognises electricity as a feasible alternative to small aircrafts and short commercial flights. For the time being, long-haul electric aircrafts do not seem realistic. The power necessary to fly a Boeing 787 or Airbus A350 would require a tremendous weight of battery that is not yet achievable. Such projects have been halted, such as the E-Fan X project (Airbus and Rolls Royce), abandoned in April 2020 due to the health crisis.

Today, electric aircrafts powered by batteries are only a reality for small aircrafts. While we know we won't yet see electric long-haul aircrafts in the next 20 years, recent innovations have taken the concept to new scale and break down barriers every month. Nevertheless, another technology could allow electric propulsion without the limitations of batteries : Hydrogen and fuel cells.

Since the NASA Gemini space program of the 1960s, hydrogen has been applied in aerospace in two different ways : fuel cells and combustion. Now it represents a prominent trend in electric propulsion as a means to drastically reduce the environmental impact of the aviation industry.

It is important to note that hydrogen does not offer an alternative to electric motors, it is an alternative to batteries. Hydrogen replaces the need for batteries as it is directly transformed into electricity through fuel cells. This electricity is then used in the same electric motor as previously mentioned. These fuel cells generate zero emissions, only water. This is why (green) hydrogen is a great asset for clean aviation. 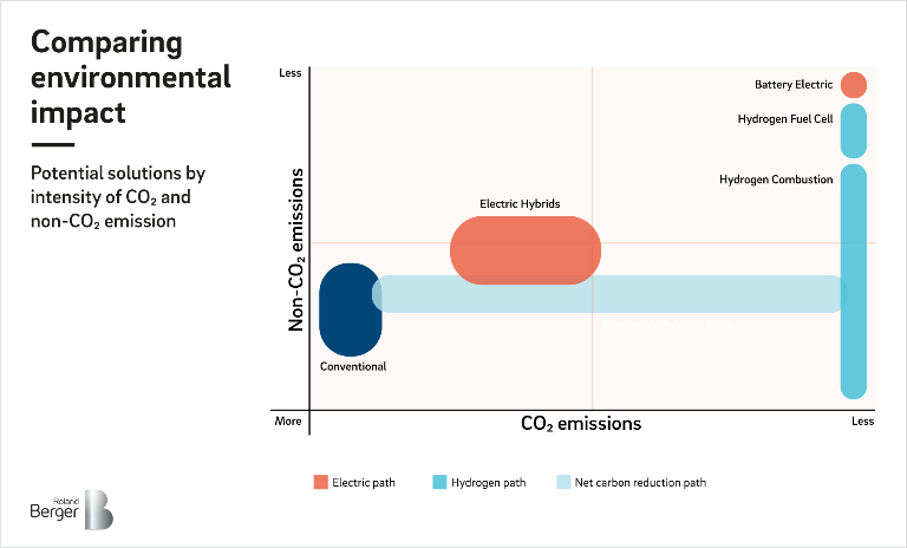 The advantage of fuel cells is that it escapes the problem posed by heavy batteries. Indeed, by producing electricity directly from hydrogen, batteries are no longer necessary – only a light alternative for temporary storage. Fuel cells are relatively light and possess a great power-to-weight ratio. However, they are not without their flaws: they take up a lot of space and the storage of a gas such as hydrogen is challenging, especially at high levels of altitude. Manufacturers are only just beginning to understand how to manage this technology. The first fuel-cell flight worldwide was in September 2020 with ZeroAvia who managed to fly a modified Piper Malibu.

Unlike batteries, the power-to-weight ratio of fuel cells allow them to be eligible for long-haul travel. This is the reason Airbus decided to work on a zero emission hydrogen-powered aircraft for 2035. They presented hybrid concepts using hydrogen fuel cells with hydrogen combustion in modified gas turbine engines.

Hydrogen also has the advantage of being easily accepted within industry. Existing infrastructures have the capacity to refuel and could easily be tweaked for hydrogen –batteries would require a drastic transformation of the aeronautics industry’s value chain.

As with any large-scale transition, there is a political agenda to consider. The European Commission is pushing the development of Hydrogen, notably to compensate for its increasing gap in battery manufacturing. By betting on hydrogen, European countries position themselves strategically among future energy markets. With large-scale investment from global players such as Air Liquide and Engie, and government aid (Germany, France, UK, Norway), the aeronautics industry can count on strong support for this sector to develop.

Hydrogen is therefore positioned both as a complement and an alternative to batteries. Aviation will need these technologies to coexist in order to significantly reduce the industry’s environmental impact.

The aviation industry is facing an unprecedented crisis in a harsh environmental context. While the IATA expects air traffic to return to normal in 2024, the short-term appears bleak. This situation forces major players in the sector to engage shareholders in long-term perspectives by building ambitious and disruptive projects. In view of the ecological situation, new regulation and consumer expectations, the new long-term vision is clear: the new era of aviation is clean and carbon-free.

Fortunately, this new era coincides with the maturity of many pro-environmental technological innovations and strong political will. The aviation industry can rely on industry pioneers to continue breaking down barriers through electric propulsion and fuel cells. Through innovation, political synergy and economic intent, a sustainable technological revolution could gain momentum in the aeronautics industry.

A certified green taxibot for airline and airports operations

A predictive aircraft maintenance solution based on big data analytics