In this insight, Cleantech Group's Louis Brasington looks how corporates are engaging with hydrogen innovators.

Green industries are about to be flooded with billions in investments from governments eager to rebound from COVID-19 and fight climate change. This month, Europe unveiled its hydrogen strategy including:

With over 70% share of global GDP linked to hydrogen country roadmaps, hydrogen has made a triumphant return to the frontlines as a critical energy vector. What’s the big deal? Hydrogen can account for 24% of global final energy demand and 5.4 million jobs by 2050, playing a sectoral integration role to support the decarbonization in industry, transport, power generation and buildings.

It’s not just governments who are looking at hydrogen to reach 2050 climate goals, corporates are also repositioning to play a role to maintain relevant in a fossil fuel free future. As a result, incumbents are engaging innovators and are actively participating.

Why do corporates care?

Big oil has collectively pledged billions towards sustainable hydrogen production. Like the gas corporates, grey/blue hydrogen (natural gas/CCUS) is seen as great intermediary rather than going full on renewable, avoiding the potential for stranded fossil fuel assets. However, as players like Shell look to become large electricity companies they are heavily pursuing a future using renewables for green hydrogen production. Repsol plans to develop a facility that will use carbon dioxide and green hydrogen to generate net-zero emission fuels for use in the transportation sector and Shell’s NortH2 project in the North Sea area will see 3-4 gigawatts of wind energy for hydrogen production before 2030, for 750 MW electrolyzer capacity.

Industrial players such as Paul Wurth and ArcelorMittal have all stated that the molecule has a key role within their long-term decarbonization strategies, using hydrogen-based furnaces, turbines for electrolysis for high temperature heat applications, or for industrial feedstock. Due to long life cycles of industrial heat, process and power assets, decisions on whether to commit to hydrogen are being made today. Steel EPC Paul Wurth is actively working with innovator Sunfire on a large-scale, high-temperature electrolyzer project, MULTIPLHY.

Industrial gas companies, automotive players, electric utilities and material/component suppliers all have existing roles in hydrogen, but will also look to adapt to some of the new opportunities created in the sustainable hydrogen market.

A new value chain is emerging from players who are looking to cater towards a distributed, sustainable future, addressing key market bottlenecks. Here is a summary of the landscape which corporates have been engaging with: 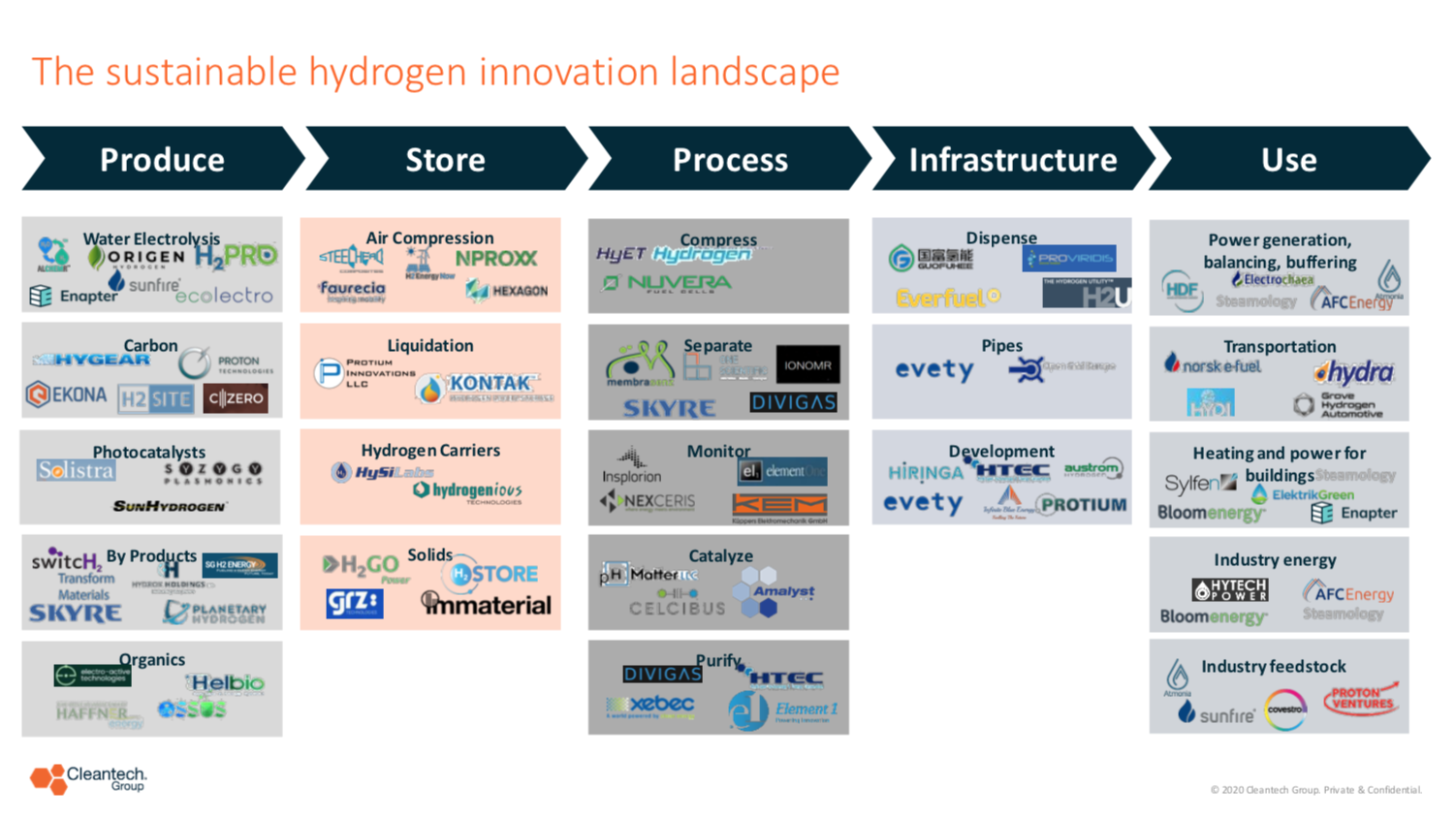 Sustainable hydrogen production remains uneconomical to its carbon-based counterpart with common methods such as PEM costing between $4-$6 per kWh. Innovation exists for reducing component capital costs, increasing the efficiency of the production processes, and increasing performance of materials. Innovators such as H2Pro, Ossus Biorenewable and Planetary Hydrogen are in pursuit of novel ways to drive down the cost of production.

Storing hydrogen is a costly and cumbersome process. Typically stored in compression tanks as gas, costs are largely dictated by raw materials, and other key components for compression, purification and separation. Opportunities for innovation exist for players such as H2 Energy Now, H2GO Power and GRZ who are looking at better ways to improve the economics based on volumetric density, while prioritizing safety.

Corrosion, leakage, performance and monitoring accuracy are a handful of the issues the existing value chain has today. Innovators are largely taking on each issue individually. Divigas, founded last year, developed a hydrogen separation membrane which removes sulphites & contaminants, increases heat resistance and lifecycle. For distributed hydrogen users such as the trucking sector, refuelling remains costly and economies of scale are also essential.

Once the cost and efficiencies upstream are addressed, there are a wealth of opportunities for innovative hydrogen usage. The figure below highlights which applications sustainable hydrogen could be a supportive role, including both new and existing applications, which are currently responsible for 60% of the world’s energy and process-related emissions. 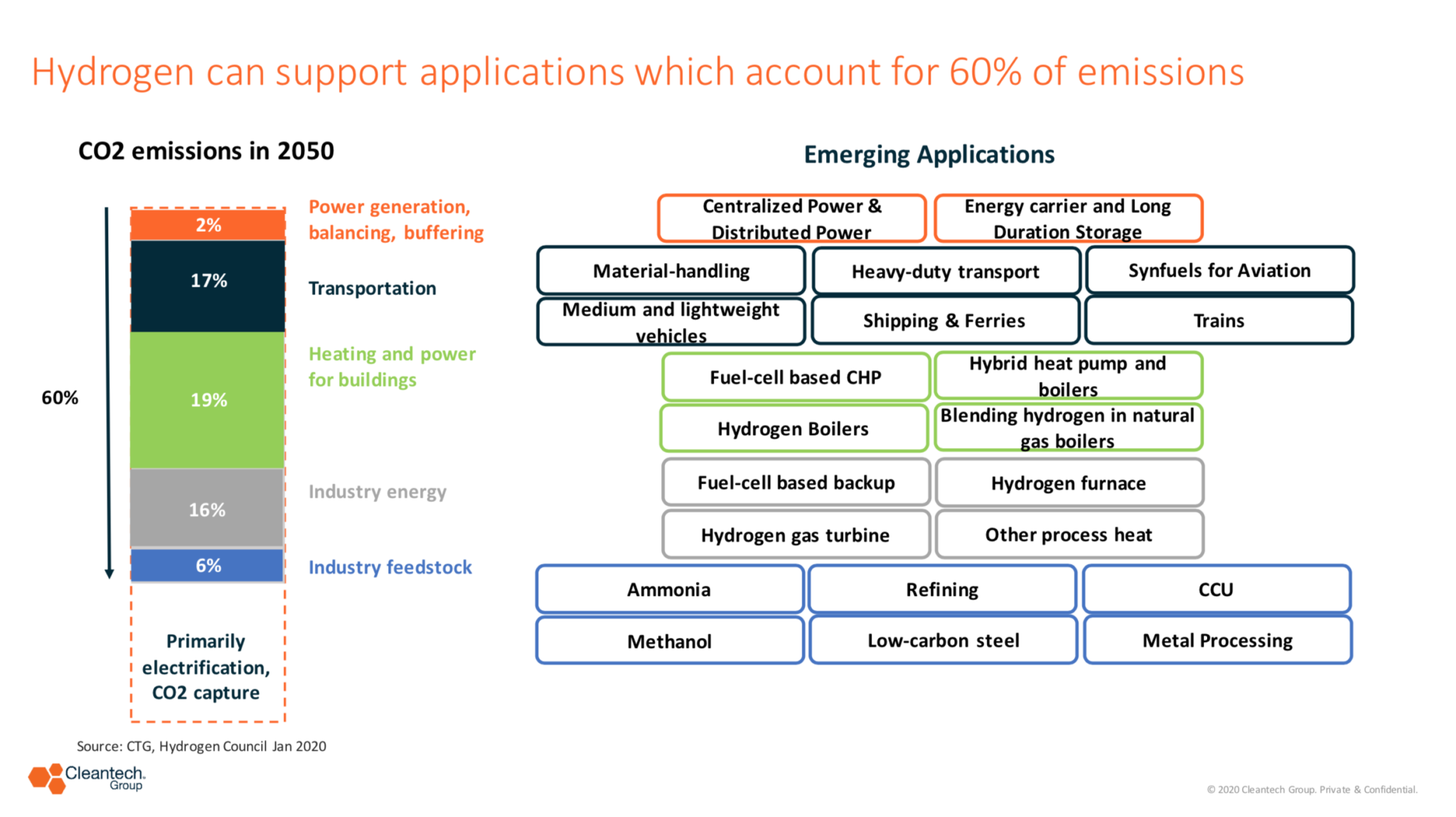 Key opportunities to engage with innovation in hydrogen usage focus on increasing utilization of assets through aggregation of demand and synchronisation of deployment and increase investment into supply assets.  This will allow demand for new hydrogen applications to grow. Key players working on hydrogen applications who will be joining us at the Cleantech Interactive include Steamology, Norsk e-Fuel, Sylfen, and Hydra Energy. How have corporates been engaging?

Corporates have been using several innovation approaches in order to engage with the emerging hydrogen market.

Players such as Shell and Toyota are engaging with accelerators to run corporate accelerator programs. The H2 Refuel Accelerator program for example is a partnership between Fraunhofer TechBridge, Greentown Labs and the Urban Future Lab focused on hydrogen on behalf of the two corporates, incubating seven start-ups last year.

A handful of hydrogen specific funds are currently allocating capital to early stage start-ups, accelerating technology development with the goal of incorporating IP into the corporate group activities, or via a funds corporates LPs .

Venture activity in hydrogen has surged in the last couple years, totalling $460 million in 2019. In addition, as governments and large energy and industrial companies announce plans to invest in hydrogen, shares of hydrogen-focused companies such as Bloom Energy and Ceres Power have jumped.

Looking to share the capital expense burden of building up hydrogen infrastructure, players are clustering and forming consortiums. From 2000 through 2019, 253 MW of green hydrogen projects have been deployed.  As of March 2020, that pipeline has increased to 8.2 gigawatts, or 31 times the cumulative installed capacity today. Major corporate strategic partners include

Players who already have experience in the hydrogen value have been using acquisition as a way to build up expertise in the emerging green hydrogen market. Plug Plug, a global fuel cell manufacturer hopes to be reposition as a vertically integrated green hydrogen player, closing two acquisitions in June with PEM Manufacturer Giner and infrastructure player United Hydrogen Group.

This article was originally published by the Cleantech Group. Read the original post here.

Written by Louis Brasington on September 23, 2020

The Hydrogen Car - here and now, not just for the future