For over a century, cars have been the symbol of liberty and progress. Since their invention at the end of the 19th century, passenger vehicles have become an essential part of our lives. An estimated 1.1 billion cars are on the road today, and this figure is set to double by 2040. But this love relationship is coming to an end.

Combustion engine vehicles are large contributors to global warming. Whether they’re fueled by petrol, diesel or LPG, passenger vehicles account for about one third of global oil demand and produce about half of all transportation-related greenhouse gas emissions.

Global warming isn’t the only issue. Cars contribute to air pollution, which is a major threat to human health. Cities all around the world are suffocating due to gas emissions from vehicles - carbon monoxide, unburned hydrocarbons, sulfur oxides, nitrogen oxides, particulates, and other air toxins… According to the World Health Organization, 9 in 10 people around the world breathe polluted air, causing approximately 7 million deaths each year.

While electric vehicle sales are on the rise globally, measures need to be taken to reduce the pollution from all the existing combustion engines still on the road. 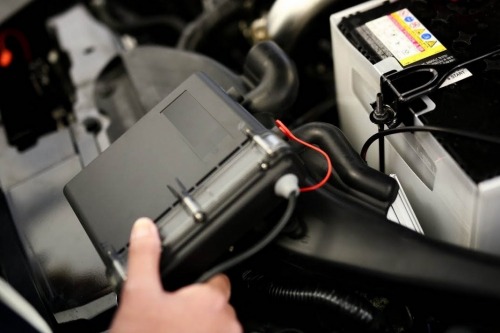 Antismog is a hydrogen boosting fuel enhancement technology which can be plugged to any type of combustion engine. This solution adds hydrogen to the fuel-air mix in the vehicle’s engine. This reduces the number of unburned gases and particles, achieving a remarkable reduction of harmful emissions by up to 80% (up to 55% for NOx and up to 95% in terms of particles) and a fuel economy up to 20%.

However, ambitious regulations are still needed in order to limit GHG emissions from transport. Some countries have started to lead the way. According to a survey by the Center for Climate Protection, “sixteen countries have taken varying types of action to phase out ICE vehicles and increase the number of EVs”. The fight against ICE is clearly led by Europe, with Austria, Denmark, France, Germany, Ireland, the Netherlands, Norway and the U.K. having all set dates to ban new fossil-fuel car sales. Meanwhile, hydrogen fuel enhancement technologies could be an efficient way to make vehicles cleaner.

You have a solution to fight air pollution?APPLY for THE SOLAR IMPULSE EFFICIENT SOLUTIONS LABEL

Electric Planes : How the industry is preparing for the future