WaveRoller is a device that converts the ocean wave energy into electricity.

You have probably spent time watching and listening to the constant movement of waves breaking on the shore. The movement never stops : waves hit the coast in the morning, daytime and night, making it a constant and reliable source of energy that can be harnessed and plugged into the energy grid.

Among renewable energy sources, wave energy is characteristically one of the most stable and predictable. As waves crashing onto the shore are a culmination of energy collected over thousands of kilometers of winds on the ocean’s surface, the impact of local weather conditions are minor and the changes in the resource are gradual and highly predictable.

Wave energy provides a source of electricity production that can stabilize the energy system by offsetting production shortages from wind and solar power whilst simultaneously increasing decarbonization and bringing additional production capacity online.

The potential of Wave Power

Wave energy machines use the sea movement to generate electricity. Some use the power of breaking waves, the movement of the tides or the pressure of the waves on the ocean floor. The energy harnessed can be inserted into the electricity grid and used to power houses and buildings and is complementary to other renewable sources of energy such as solar or wind.

Areas near the oceans are of course the ones who can benefit the most from this type of renewable energy. According to the UN, nearly 2.4 billion people (about 40 per cent of the world’s population) live within 100 km (60 miles) of the coast, meaning that wave power can be an important source of renewable and reliable energy for them. 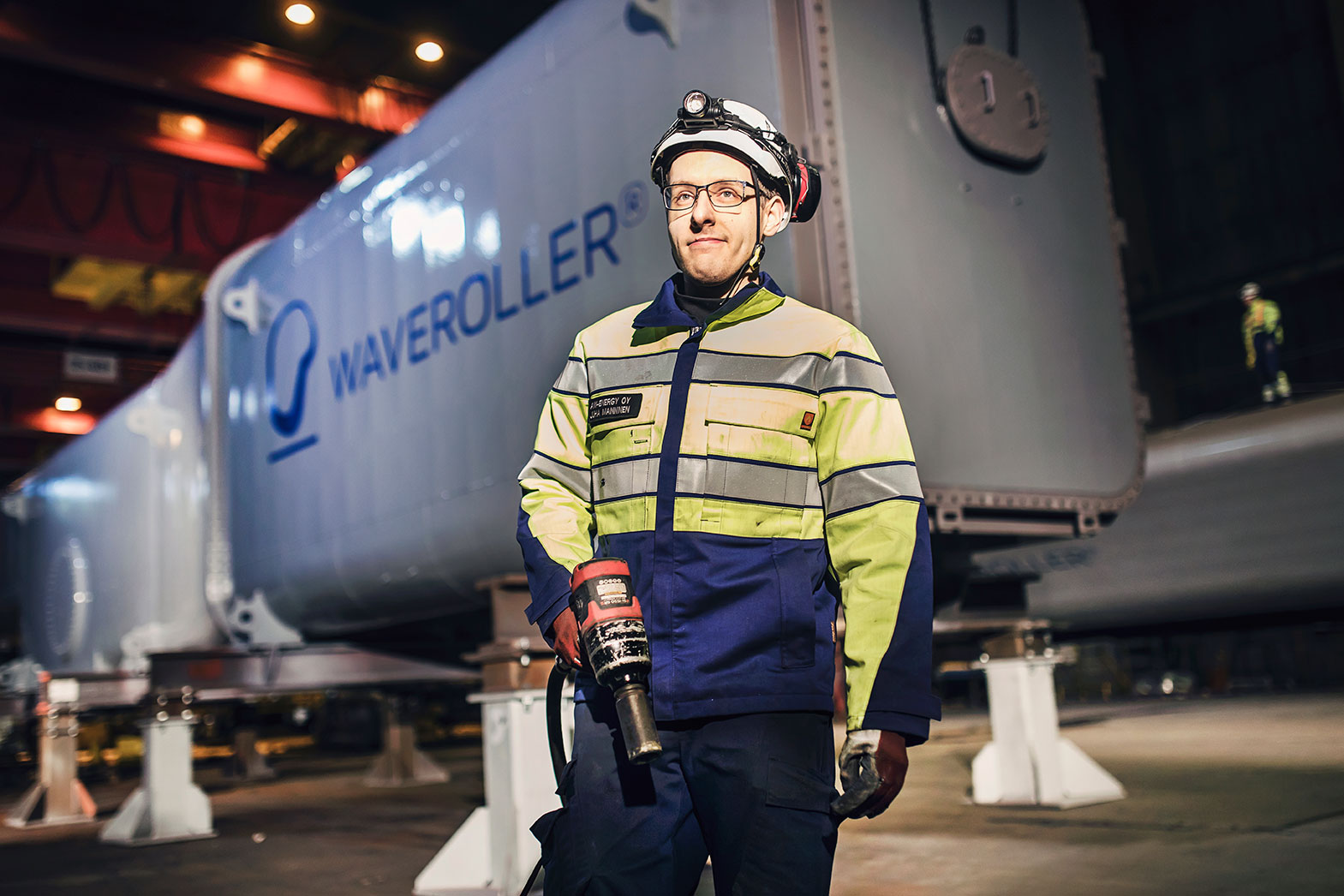 The WaveRoller technology utilizes a hinged panel that is anchored on the seabed near the shoreline to generate electricity from near-shore ocean wave energy. A single WaveRoller unit is rated at between 350kW and 1000kW, with a capacity factor of 25-50% depending on wave conditions at the project site. The technology can be deployed as single units or in farms.

The back and forth movement of the ocean waves moves the WaveRoller panel, which can absorb up to two megawatts of power from each wave surge. As the panel moves it activates a hydraulics system which drives an electricity generator. The generator is then connected via a marine cable to the electricity grid onshore.

As the WaveRoller panel moves and absorbs the energy from ocean waves, hydraulic piston pumps connected to the panel pump hydraulic fluids inside a closed hydraulic circuit. The high-pressure fluids are fed into a power storage and smoothing system, which connects to a hydraulic motor that drives an electricity generator. The electrical output from this renewable wave energy power plant is then connected to the electric grid via a subsea cable.

The WaveRoller has been developed and tested over the course of 20 years, with pioneering results for the industry. The first electricity production with WaveRoller in to the grid was already in 2012 and it is the only wave energy technology with third party certification and verification.

Ocean based technology has been identified by the EU’s network of European Technology and Innovation Partnerships (ETIP) as being particularly viable for Europe, and other parts of the world.

The main benefits of WaveRoller are:

WaveRoller Impact on the environment

WaveRoller technology is designed to have minimal impact on the environment.

The WaveRoller foundation actually works as an artificial reef, creating a new habitat for marine life. A WaveRoller does not produce any emissions during operation. Other emissions during its lifecycle, from building the devices to its disposal, are significantly smaller than those of plants powered with fossil fuels. Apart from its low space requirement, a WaveRoller device operates underwater and has a very low visual impact, ensuring the preservation of the natural beauty of the sea and coastline. AW-Energy has carried out a full range of environmental monitoring procedures ranging from sediment movement to subsea noise levels. A WaveRoller site in Peniche, Portugal is located in a Natura 2000 area.

Are you a sustainable and efficient solution ?Join us !

Sabella, sustainable and reliable electricity from the power of tides