A waterless toilet installation for isolated and water stressed areas.

“This is a container of human waste” said Bill Gates while brandishing a beaker of poo, as he got on stage at the Reinvented Toilet Expo event in Beijing. What was the founder of Microsoft doing with human faeces at a conference? In 2011, the Bill & Melinda Gates launched the “Reinvent the Toilet Challenge”. Seven years later, the Gates Foundation has spent $200m to change the way human waste is treated for people who don’t have access to safe sanitation.

While developed countries take it for granted, sanitation is a major issue is many developing countries. According to the World Health Organisation (WHO), 2.3 billion people around the world still don't have access to basic toilet facilities. Untreated wastewater contaminates sources of drinking water, and spreads diseases, causing childhood deaths and malnutrition.

In places where population do not have access to water, flushing down the waste is not even an option. EcoLoo, a Sweden-based company, is tackling the issue by developing an odourless, waterless, sewage free, energy free, maintenance free, toilet. Their toilet has a no harmful impact on the environment and can be installed anywhere.

While waterless toilets have been around for some time, EcoLoo’s innovation is elsewhere. The waste is treated through a bacterial culture inside the toilet. The aerobic digester system then turns the waste into an organic fertiliser which can be used for agriculture, transforming waste into a potential resource or even an income.

Indeed, the award-winning solution not only saves water and electricity, improves health and sanitation, but also offers a socio-economic benefit to low-income communities who can sell the organic fertilizer generated in the system. “Our goal is not only to establish a profitable business, but an effective, long-term and sustainable one based on an "Inclusive Social Business Model" and sustainability in order to create job and business opportunities locally” says EcoLoo.

Thanks to various designs and shapes, EcoLoo can be installed in rural or urban areas, houses or high buildings, schools, events and festivals. The waterless toilet was even chosen to be installed at the UNESCO World Heritage site of Petra, where they provided 10 units back in 2015. 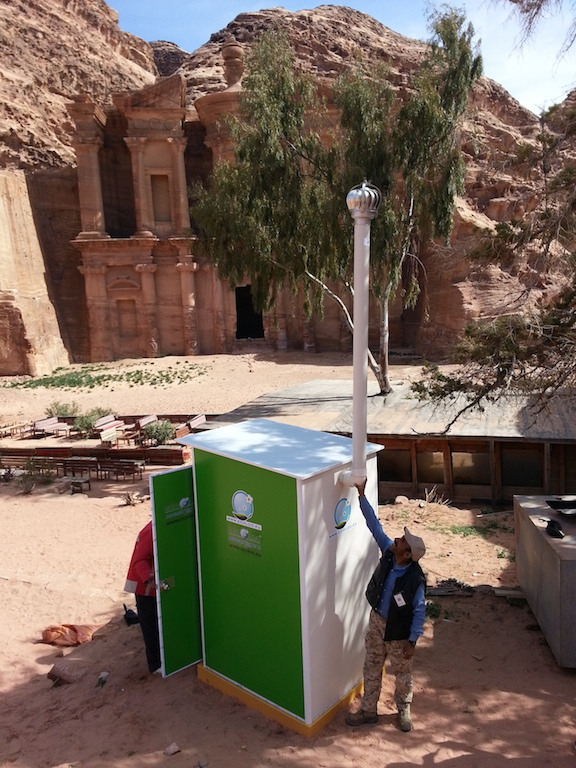 An EcoLoo unit installed in Petra