In past decades traffic congestion in cities has commonly been increasing, considerably impacting the quality of urban life both from an environmental perspective and on citizen’s mental health. Today’s measures set by cities aim to dissuade people from using their cars (increasing road taxes, parking fees, etc) but rarely offer alternative means of transportation.

Urban Air Mobility (or UAM) is increasingly being seen as a future option for affordable, rapid, and sustainable travel, addressing both congestion and environmental issues faced by modern cities.

Although still in development phase, the novel advancement in technology has triggered more than 120 startups and aerospace companies to develop UAM vehicles known as eVTOLs (electric vertical take-off and landing vehicles), all envisioning the potential of UAMs in future urban mobility.

These aircraft employ innovative new electric propulsion systems which could deliver a range of benefits. By reducing the need for journey by cars, UAMs could help to decrease the carbon emissions associated with travel, as well other benefits like reducing air pollution. UAMs also reduce the time spent on transport (flying in straight lines at speeds above 250km/h), directly benefiting commuters' lifestyles. Air transport could also enable the removal or reduction of road infrastructure in city centers, helping to increase citizens' quality of life by reducing noise, increasing access to green space and more.

The leading eVTOL companies were created more than ten years ago and plan to start operations as soon as 2024. Joby Aviation is currently the leader regarding project advancement (top right picture in Figure 1), closely followed by other companies competing in terms of their flight range, passenger capacity, and unmanned flying capabilities. In fact, Volocopter (bottom left in Figure 1) has agreed with the city of Paris to launch their first air taxi service for the 2024 Paris summer Olympic Games! 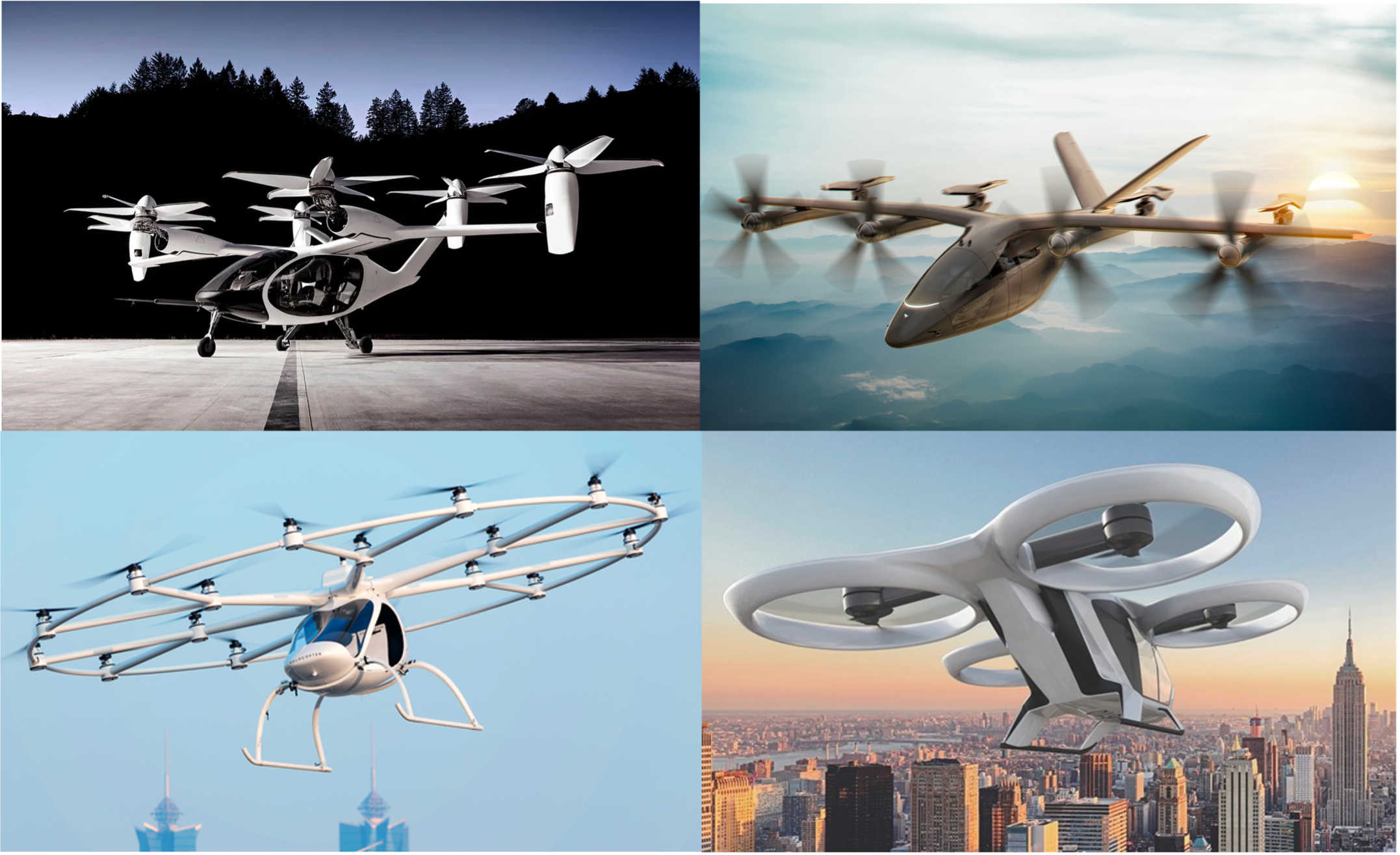 However, there are currently significant limitations to the implementation of UAMs in cities. On the technical side, current battery technology greatly limits the operating capabilities of the aircraft (flight time and range), and thus substantial infrastructure for battery charging are required. Similarly, the aircraft require special landing pads (know as vertiports) which are space-consuming, and are therefore not ideal for urban areas. However, these can be fitted to rooftops or other existing city infrastructures (parking, supermarkets, offices, see Figure 2) mitigating the challenge of implementing such infrastructures in city centers. 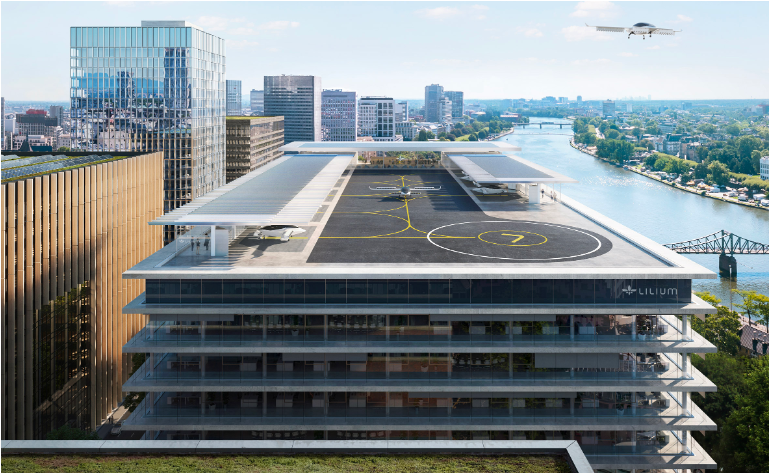 Operation-wise, aircraft airworthiness regulations and public acceptance are the main challenges. While regulations and certifications may be given by aviation authorities to ensure a safe aircraft through thorough testing and modification of current aviation laws, public acceptance is more troublesome to address. Despite strong objectives to develop autonomous aircraft, a survey performed in November 2020 shows only 21% of respondents said they would feel safe traveling in an autonomous eVTOL vehicle.

The required changes from both the technical and operational limitations discussed above oblige for very progressive stages of implementation of the future transportation means. Urban Air Mobility is forecasted to inaugurate within the coming ten years, focusing on cargo, emergency vehicles (ambulances, firefighters), and passenger shuttles (following predefined routes connecting airports to city centers for example) with pilots at first. Predictions state that private point-to-point services (air-taxi) will only start around 2040 or 2050, given that the present obstacles faced are overcome.

Two experts in the aerospace sector were asked their point of view on the subject.

We will see VTOL operational in a 2030 time frame. Some pilot optional models are not far from certification which could become an autonomous platform in the mentioned time frame. This is down to the maturity of the overall system and if regulation advances at the same pace (to my knowledge, the regulation does not cover autonomous aerial systems yet). It is probable that this would be less of a point-to-point operation but more likely be shuttles.

Dr. Sarah Qureshi, CEO of Aero Engine Craft and Solar Impulse Foundation Expert, believes UAMs are likely to face significant barriers, but could find a place in the mobility market:

Vertical takeoff could be a very expensive phenomenon and would by no means replace conventional transportation. However, it would be welcomed for low weight freight transportation to inaccessible areas and as a means of providing an alternative to traffic congestion on the roads but would definitely remain unmanned. Again, that would require a huge investment in terms of air traffic control operations of unmanned aerial vehicles and their coexistence with large commercial transport aircraft for the sharing of a busy airspace.

For Dr. Noppel, it may take some years before UAMs can overcome key challenges, such as cost, to become commonplace:

Initial methods will be in the several $100 per hour and therefore not a means for mass transportation. So you will not replace the existing model but offer an additional alternative that is faster but also more expensive. In the long run, as the technology matures and is more established, the transition to the mass transportation market may take place.

Presented below are a few Labeled Solutions focusing on sustainable mobility and smart cities, and which could help to grow technologies relevant for UAMs.

> EPS55 is a certified electric propulsion solution to accelerate the transformation of the aviation industry by making it quiet, clean and affordable. It reduces more than 250kg CO2eq per hour of flight while greatly reducing flying costs.

> NEXT are modular electric vehicles that can serve ad various transport solutions. The capsules may be coupled as desired by the customer to be used as a shared car, taxi, bus, last-mile delivery van, a truck for long distances, and more

Urbain Air Mobility proposes a rapid and sustainable means of transport serving city mobility as well as freight or emergency services. Expected to launch as shuttle services by 2030, many technical and operational hurdles are still to be overcome before these aircraft can be used safely.