Most of us feel satisfied when we throw a plastic bottle in a recycling bin. “That one won’t end up choking a turtle, or floating in the Great Pacific Garbage Patch”, we think. Unfortunately, that is far from true. According to a study published in Science Advances (“Production, use, and fate of all plastics ever made”), of the 8.3 billion tonnes of virgin plastic ever produced worldwide, only 9% has been recycled! Nowadays, the best estimates put the proportion of recycled plastic at approximately 20% (Our World in Data).

Why does this happen, even though you sort your bin carefully? Because recycling plastic is a complex process, it’s still expensive, and most importantly, the resulting plastic is difficult to use. Most recycling technologies use a thermo-mechanical process, meaning that the plastic is melted, and reformed into new products, which can damage the plastic.

In February 2019, French company Carbios made a major announcement in the fight against plastic pollution. It had discovered an enzyme capable of breaking down 90 percent of the polymer plastic back into the monomer building blocks in only 10 hours - a process known as depolymerization. Once the process is achieved, the monomer can be re-polymerized into plastic polymers of a quality equal to the original polymer. This means the virgin material can be used to make new plastic items, almost infinitely. 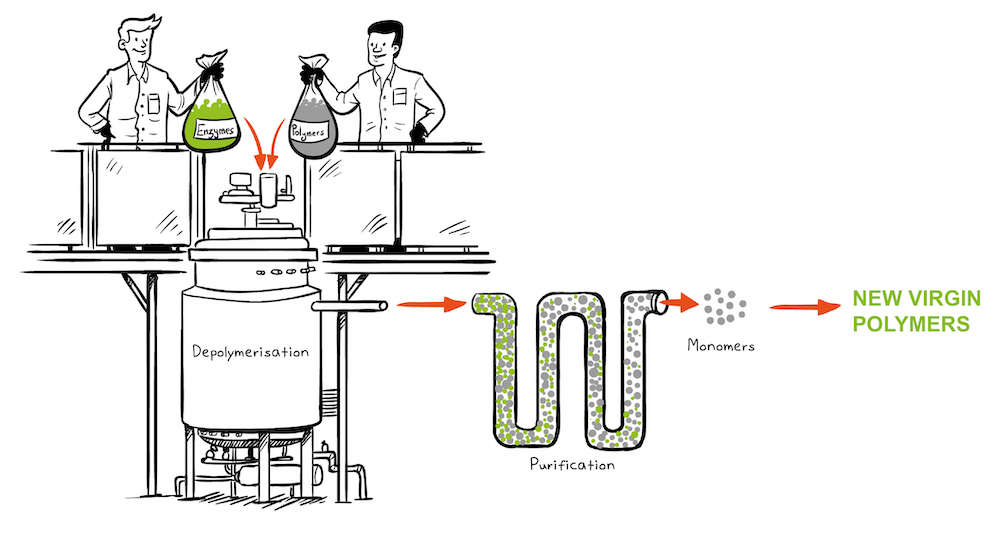 Carbios’ groundbreaking technology is gaining major attention from the world’s biggest consumer goods companies, such as PepsiCo, L’Oréal and Nestlé, as sustainability has become a major concern for consumers.

The challenge for the French company is now to scale this process in order to deal with the approximately 70 million tonnes of PET plastic produced annually around the globe. In April, Carbios announced it would partner with TechnipFMC’s operating center in Lyon, to develop a plant for its Enzymatic Recycling Process.

In a press release, Jean-Claude Lumaret, CEO of CARBIOS said “our advances foreshadow the industrial deployment of a revolutionary technology which will allow improved recycling for some of the most commonly used plastics. Our goal is to provide consumers and corporates with an efficient and competitive circular economy solution that can help tackle the global plastic pollution crisis”.