Power may indeed be a dominant factor in both air separation and hydrogen production and cogeneration, but water management is certainly not sidelined.

With a water consumption of 79 million cubic metres per year, Air Liquide equals its customers' water usage. About seventy professionals worldwide are currently dealing with the water theme. Paul McNicholas leads these water experts, and he offers his vision on an affordable, reliable and sustainable water supply.

Air Liquide is one of the well-known suppliers of various gases for the steel, petrochemical, chemical, process and food industry. Other typical environments in which these gases are used include the glass and automotive industry. The company furthermore provides highly specialized and high quality gases for the high-tech electronics industry, as well as medical gases.

Some of these gases are produced by splitting up air. The enterprise also produces hydrogen gas via steam reforming biogas or natural gas, or by the electrolysis of water. A by-product of this process is carbon monoxide, which also has its own market. Depending on their volume, the gases arrive at the customer per pipeline, truck or gas cylinder. Gases are often essential for the process. The company therefore opts for a production close to the customer, or ‘over the fence’, as the company calls it. Air Liquide is in this way able to deliver a 99.99 percent reliability rate, which is realized by both redundancy in, and the distribution of the gases. Air Liquide has 324 large air separation installations and 46 hydrogen and carbon monoxide factories all over the world.

A second important part of the enterprise is the cogeneration branch, which ensures the steam and electricity supply for a number of large international (petro) chemical companies. The Pergen plant on the Shell Pernis premises is, for example, fully operated by Air Liquide. The Huntsman premises also includes an Air Liquide power plant. There are seventeen installations of this type worldwide.

One of the French enterprise’s divisions that is not as well-known amongst the Dutch is (waste) water treatment activities. This is a logical activity, due to the use of oxygen for producing ozone in the world of water. The research and applications however extend further than just gases. The company’s R&D department also investigates the use of membranes to optimize the distribution of gases in water.

It will come as no surprise that energy is a dominant factor in both air separation, hydrogen production and cogeneration. But water management is certainly not overlooked. About seventy professionals worldwide are examining the water theme. Brit Paul McNicholas leads these water experts and whilst standing next to the Pergen installation, he elaborates on his vision of an affordable, reliable and sustainable water supply. ‘With regard to water consumption, we almost match our customers’, explains McNicholas. He reveals a table from 2015 in which the water consumption of 79 million cubic metres per year is just a bit lower than the consumption of DOW Chemical, and even exceeds BASF’s usage. The petrochemical companies amply beat Air Liquide with regard to water intake, but a lot of this water ultimately ends up back in the water system. ‘When splitting up air, we use water for cooling the compressed air’, continues McNicholas. ‘Approximately seventy percent of the water evaporates during this process, whilst the remaining thirty percent is treated on site, or discharged to the closest local waste water installation. This process accounts for sixty percent of our water consumption, the other forty percent is due to other processes, such as cogeneration. Most of this water disappears in customers’ processes.’

Disappearing may be somewhat of an overstatement, as water vapour is ultimately part of the entire system, but the company always needs water and power to continue the supply of treated steam to its customers. ‘Our customers are furthermore placing increasingly higher demands on steam quality’, adds McNicholas. ‘In some cases, we produce this water ourselves, like at our Bayport branch (United States, ed.) where we not only separate air and produce hydrogen, but also produce steam from our own produced water. The advantage of such an integrated system is that you can produce much more cost-effectively and energy-efficiently. A combination of exothermic and endothermic processes requires relatively little added energy. We can also reuse the residual heat in the return water. This integral approach is unfortunately not always possible. In the case of Shell Pernis, we provide steam to the site and power to Eneco. Since Pergen’s commissioning in 2008, water has been supplied by Evides Industriewater. In collaborations like this, we obviously aim for the highest achievable efficiency, but supply reliability is equally important.’

The demiwater factory has recently been expanded with a condensate treatment installation. This condensate polishing unit (CPU) treats water that remains after steam has transferred its heat to the process, in order to reach a quality suitable for creating steam immediately.

Water recovery has less priority in the Netherlands than anywhere else in the world. ‘The water that we use usually ends up in a collective waste water treatment, or to a communal sewage treatment installation’, continues McNicholas. ‘In the case of air separation, we only use the water for cooling the air, which hardly contaminates the water. Reusing the water can be interesting for cogeneration installations, as it often contains energy in the form of heat.’

The water stress is more noticeable in other countries, and there are substantial investments in decreasing the demand for water. ‘The best examples come from Singapore and China’, according to McNicholas. The water stress in these areas is felt to such an extent, that authorities have to intervene in water consumption.‘ In China, we are, for instance, obligated to recycle and reuse 65 percent of our water. The same applies for Brazil, where we have managed to reduce 63 percent of water consumption. There are some cases in China in which we cannot even discharge one single drop of water. These requirements are very strict indeed: the only thing allowed to leave the factory is powder. Every drop of water must be reused.

McNicholas doubts whether these kinds of zero liquid discharge solutions are, energetically and environmentally seen, the best ones. ‘In many cases it is best to just let nature do its thing, and treat water naturally. In areas with ample water stress, other considerations apply, if only because local authorities are able to enforce these demands. Legislation is thus the best motivator for innovation and investments in saving and treating water. McNicholas is convinced this legislation will become stricter. ‘As climate change continues, more water stress areas will arise. The predictions for 2050 are that the demand for water will rise with 55 percent. The largest part of this percentage is due to the manufacturing industry, who will see its demand in this time span increase by four-hundred percent. The water consumption of utilities companies will also increase, and is estimated to rise by 140 percent. The world population is also rapidly increasing, corresponding with a 130 percent increase of domestic water use. If the industry continues in this way, there could well be shortages. People are always put before processes, and therefore the industry will have to find ways to reduce its water consumption. 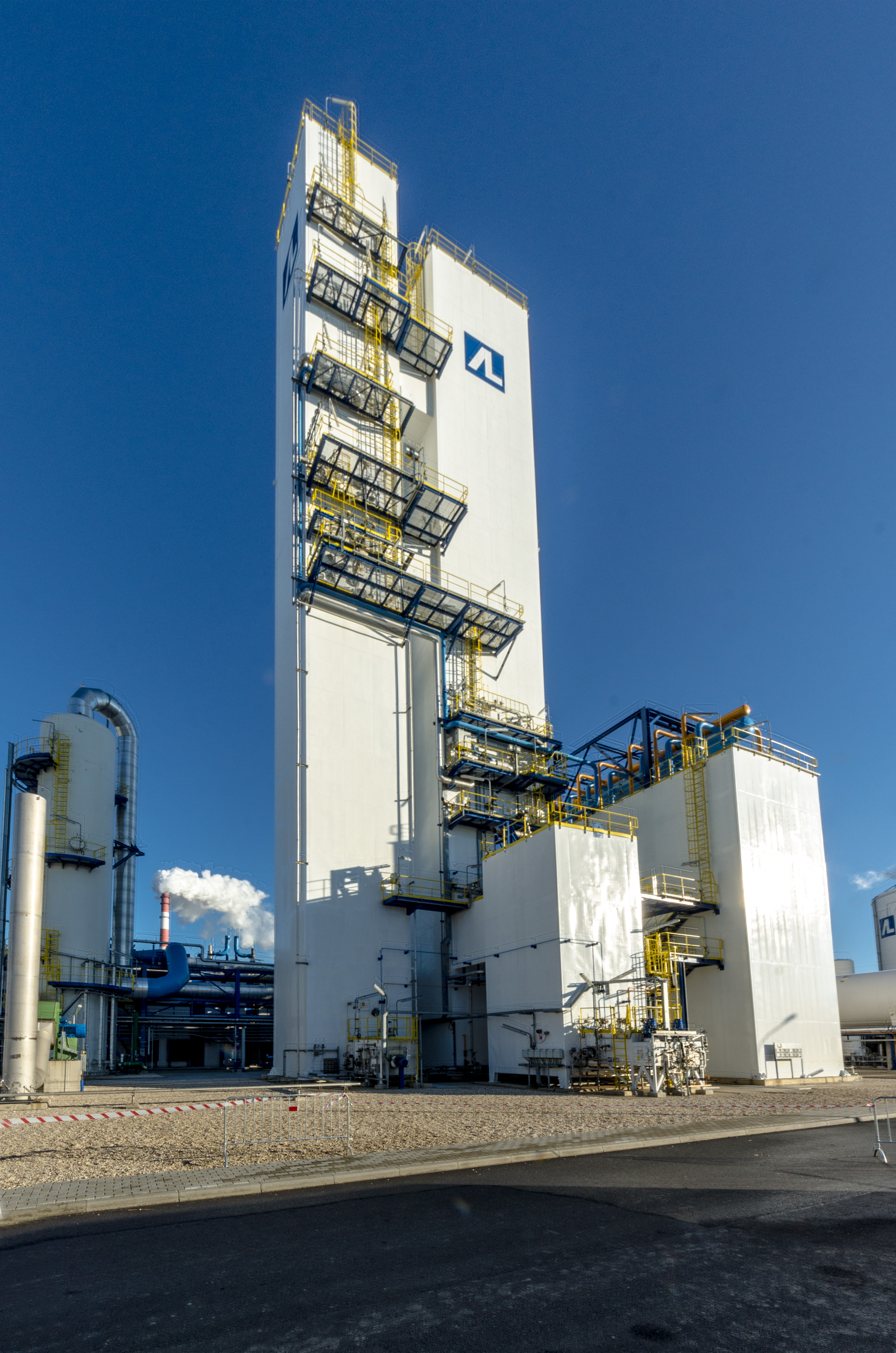 Alongside quantity, water quality is another concern. ‘Micro-pollution and biocide by-products in particular create an increasing problem in water treatment. In many countries, also in Europe, legislation is being considered to reduce this contamination. Many of these contaminations can be solved by using ozone. We supply pure oxygen, which can be used to make ozone.’

McNicholas is not yet entirely convinced if water is receiving the attention from the industry it deserves. ‘Our power consumption and its related costs far exceeds that of water, too. There is a direct link between energy and water, in which power is the heart of a company, and water is the blood.’

The Pergen cogeneration plant on the Shell Pernis premises supplies seven-hundred tons of steam per hour, and generates approximately three-hundred megawatts of electricity. For a highly efficient cogeneration plant like Pergen, quality is, along with water supply security, another important matter. One requirement is a conductivity of less than 0.2 micro Siemens and a total organic carbon content of less than two-hundred parts per billion.

With a total capacity of 1,055 cubic metres of demiwater per hour, the installation is one of the largest of its kind in Europe. The installation is fed with industrial water from Evides Industriewater. As the water is of a constant and high quality, the dimensions of the process water installation remain quite modest. The demiwater process is based on ion exchange, as this treatment technology has a relatively high recovery. This results in savings on feed water and a decrease in waste water discharge. The feed water flows through two pipelines to two break tanks of 10,000 cubic metres each. From these tanks, the water is pumped to the demi installation, consisting of five production lines in total. Each product line includes a cation filter with a weak and a highly acidic resin, a CO2 degassing tower, an anion filter with a weak and a highly strong alkaline resin, and a mixed bed filter as polisher. The final polishing step includes conducting the water through a reverse osmosis installation, to ultimately reach the low TOC values as established in the contract.