As much as face-to-face meetings with Heads of State are interesting when you can show them the number of solutions available to achieve the objectives of the COP, their speeches are too often empty when they follow one another from the podium of the first formal plenary session. Their words have been copied and pasted for ages.

This year was no exception. After the strong thanks to the organizers and the reminder of the list of the consequences of climate change that everyone knows by heart, the same sentence follows: “We must act now! ". We tell ourselves that this may be suitable as an introduction, but no, it’s the conclusion and the speaker returns to his seat to polite applause.

What we need for a successful COP is not to keep saying that something has to be done. Instead we should explain what has to be done and above all how to do it. From this angle, the French President is one of the few to have been explicit, with an in-depth description of concrete actions. He spoke four times longer than his allowed 3 minutes, but finally there was some substance.

The fact that this is the exception and not the rule is a tragedy. The large sign behind the speakers clearly said "Together for implementation", but that's not what I heard.

The world has knowingly headed for the climate precipice, somehow convinced that we would be saved by our own ingenuity. But what about the fact that we already have a large number of solutions and are unable to effectively deploy them at the scale and pace needed? It is a chilling and damning realization of our inability, as a society, to solve problems.

Want an example of what's going on? Today the IEA, the international energy agency, released a report saying the number of people without access to electricity will rise this year for the first time in decades. It is frankly incredible; never in history have we had so many resources at our disposal to produce clean, low-cost electricity, and yet we are unable to get them to the people who need them most. Rising food and fuel prices are largely responsible for this statistic, due to declining purchasing power – which makes me wonder why it is so easy to transfer poverty and suffering , but so difficult to export a better quality of life.

Our failure is not in technology, but in politics. This is where we need innovation, not just in the R&D divisions. Earlier today, a tweet I saw said: “The outcome of COP27 would be very different if participation was limited to people who will be alive in 2050”. The world has run out of patience with its leaders and they are doing little to convince the people otherwise. Don't they know this adage? “If you keep doing what you've always done, you'll keep getting what you always got”. 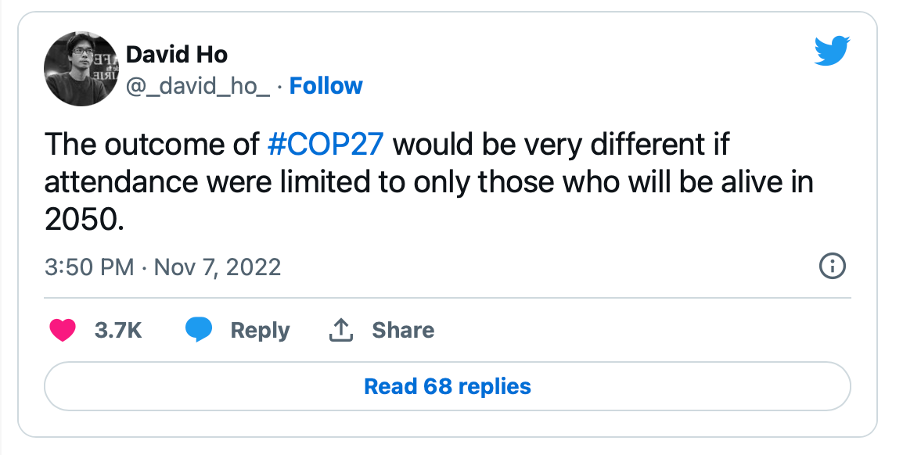 Written by Bertrand Piccard on November 10, 2022

Cutting down Methane - our last best chance to keep 1.5°C within reach

When opportunities are found in the least expected places