“Sport has the power to change the world” declared Nelson Mandela in his famous speech at the first Laureus World Sports Awards in Monaco in 2000. Sport has indeed played a major role throughout history, safeguarding peace and uniting people. Now, as humanity faces a climate crisis - arguably its biggest challenge ever - sport must once again rise up to the occasion.

Sport in general, and major sport events in particular, have a special role to play in promoting and supporting sustainability. Building venues and infrastructure, gathering hundreds of thousands of people from all corners of the globe, accommodating and feeding them has an inherent environmental impact.

Whilst the footprint is hard to determine quantitatively over an extended period of time, according to official figures, the FIFA World Cups in South Africa (2010) and Brazil (2014) generated close to 2.8 millions tons of CO2e each and the 2016 Olympic Games in Rio generated 4.5 million tons of CO2e. Combined, these 3 events generated emissions equivalent to burning 11 billion pounds of coal.

While the link between protection of the environment and sport events is not new — climate change was first mentioned in the official wrap-up report of the 1998 Winter Olympic Games in Nagano — the issue has become crucial to most sport organizations recently. Some have even put sustainability at the top of their agenda, such as Paris 2024 and its ambitious target: becoming “the Greenest Games Ever”.

This piece focuses on three particular sectors which play an important role in international mega sport events’ carbon emissions and outlines concrete actions to reduce them: travel; food and beverage; and infrastructure.

In 2018, 5 million people travelled to Russia to watch their team battle the FIFA World Cup (WC). This is a huge audience. Considering that about 85% of GHG emissions generated during major sports tournaments come from the travel and accommodation of guests, the environmental impact of such an audience is significant - in this case, approximately 1.6 million tons of CO2e. This is equivalent to the emissions from half a million homes’ yearly electricity. The forthcoming European Cup - EURO 2020 - is just around the corner and matches will be for the first time played across 12 different countries (normally only one or two countries host a tournament), leading to an additional 2 million trips that will be made during the tournament. The issue of GHG emissions generated by travelling is clearly not about to fade away. 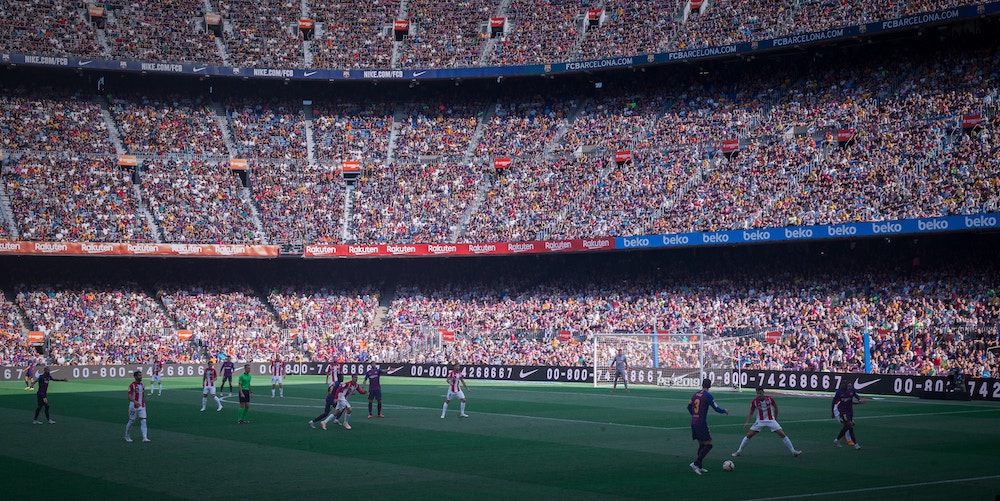 But some of the major sports governing bodies - FIFA, UEFA and the IOC notably - are taking steps to address this issue. Identifying carbon offsetting as the next best alternative to reduce the footprint of traveling to these mega events, they have started working with low-carbon development projects around the world and in host countries. As a result, FIFA has offset 1.1 million tonnes of carbon emissions from the 2014 World Cup in Brazil. The European football governing body has announced it will offset all emissions from fans traveling to the EURO 2020 competition. In addition, it has struck a deal with all 12 host cities to issue a public transport ticket that allows fans with match tickets to move around the city at no extra cost on match day - just like FIFA had done for the Russian World Cup.

During the 2018 Russian World Cup, food and beverages accounted for the second biggest portion of GHG emissions - generating 105,695 tonnes of CO2e. During the 2016 Rio Olympics, an estimated 14 million meals were served throughout the Games, producing 180,000 tonnes of CO2e.

In this sector, sport organizations can choose to work with sustainable providers and with social businesses, i.e. businesses existing for the sole purpose of solving social or environmental issues. “A social business supplier will provide you the same product as a standard supplier, but will also address a local issue, as for example a catering company which would only hire long-term unemployed people. The solution we are proposing through ESS 2024 - maximizing the share of social business suppliers in the budget of sporting events, by informing them and helping them to be better choices than standard suppliers, also on operational and financial aspects” confirms Yoan Noguier, previously a procurement manager of Rio 2016 Olympics, and co-founder of the Yunus Sports Hub, an organization which helps sports organizations solve social and environmental issues, under the visionary leadership of Peace Nobel Laureate Muhammad Yunus, father of microcredit and social business.

Consequently, Paris 2024 has pledged to use “100% sustainable and certified food sources for its competition”.

Infrastructure is central to a city or country being able to host a major sports tournament. This includes not only the venues for competition and training, but also the support venues (offices, warehouses, meeting areas, etc.), the buildings for accommodation and the roads and bridges inside the zones. Whilst they often serve to revitalize a location, it also has a significant environmental impact. The construction of the Olympic Village for the 2016 Rio Games generated some 1.6 million tonnes of CO2e. And the Brazilian government estimates that the preparation of the infrastructure for its 2014 World Cup generated 1.4 million tonnes of CO2. The 2018 Russia and 2014 Brazil WC saw investments in infrastructure rising to approximately $12 billion each, making them the most most expensive World Cups so far. But this is relatively derisory compared to the $100 billion invested by Qatar in infrastructure projects related to the 2022 World Cup, making it the most expensive to date. And yet, Qatar has also pledged to make it the first carbon-neutral one, through both offsetting measures and more efficient technologies.

Despite the huge number of infrastructure projects underway during World Cups and Olympics, strict standards in design and construction aim to reduce that footprint and make the events much more sustainable. All of the stadiums during the Russian World Cup received green certifications (based on international and Russian sustainable buildings standards) which meant that energy and materials are used in the most efficient manner. Qatar’s Khalifa International Stadium will use district cooling - a technology 40% more efficient than conventional cooling systems.

Sometimes, the least emissions-intensive structures are those that you already have and so, the upcoming 2020 Tokyo Games will use 58% of existing infrastructure and make sure that new stadium and venues will all use renewable energy; deploying solar power generation systems, solar heat utilisation systems and geothermal heating/cooling systems. Paris 2024’s Olympic Village will see low carbon and eco-designed buildings to ensure the impact of construction represents less than 30% of the total. Amsterdam’s Johan Cruijff Arena, which hosted one of the 2019 Champions League semi-finals, is powered by more than 4200 solar panels, generating an annual total of approximately 930,000 kWh of electricity - 10% of the stadium’s annual electricity consumption. 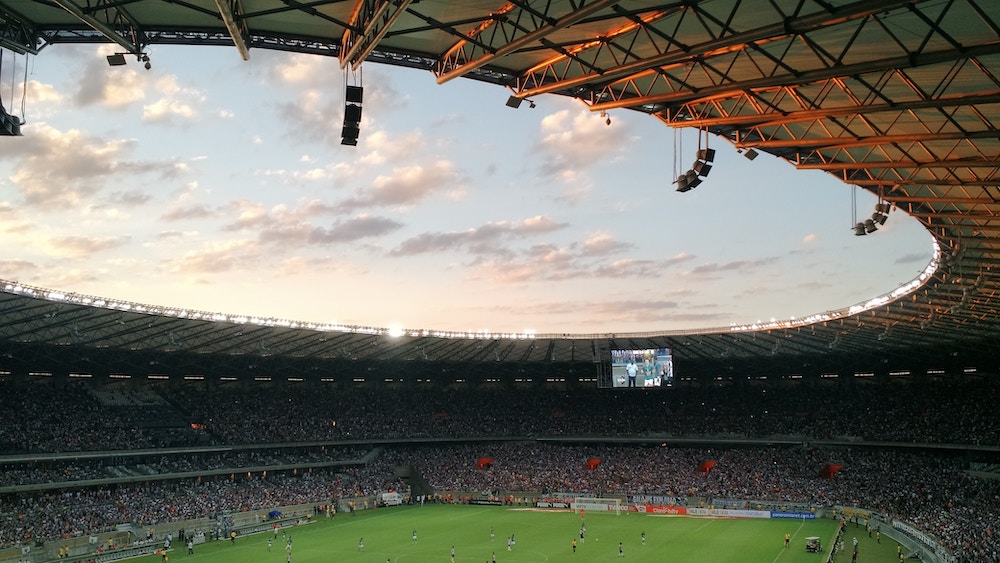 Infrastructure, travel & accommodation, food & beverage are just a few areas where sport events are improving their environmental impact. But to go further, sport governing bodies can also count on the support of international organizations dedicated to bridging sports with sustainability. At COP24, in December 2018, the sports sector and UN Climate Change launched the Sports for Climate Action Framework to “drive emission reductions of sports operations and tap the popularity and passion of sport to engage millions of fans in the effort”.

Sport and Sustainability International (SandSI) was founded to leverage the influence of sport to advance on the UN Sustainable Development Goals. With 232 members from 55 countries, the organization engages in concrete actions to “enhance sport events, venue design, and operations, influence the sports industry’s supply chain, and mobilise fans and athletes in support of sustainable, healthy and just communities” says its Chief Executive Officer Geert Hendriks. Among other actions, SandSI has written, along 2 organizations, to the European Club Association chairman Andrea Agnelli asking the body to encourage its members – the biggest and most popular football clubs in Europe – to measure, reduce and offset their carbon emissions. On June 1st, SandSI has launched the #100daysforsport campaign, demonstrating examples of professional sports organisations and events contributing to the Sustainable Development Goals. The organization also collaborates with the UN Environment on “The Last Game”, a hockey game to take place in the North Pole in April 2020 to “demonstrate the fragility of the Arctic environment".

While limiting the environmental impact of the industry is crucial, sustainability in sport events is about much more than reducing carbon emissions. The true power of sport to fight climate change is its unequaled popularity. The Russia World Cup in 2018 and the Rio Olympics in 2016 were followed by almost 4 billion viewers, more than half of the world’s population. By promoting sustainable behaviours, sport events have the power to deliver a powerful message and serve as a leader for change.

Sustainability is also a matter of importance for sports organizations because their own future depends on it. First, as the environmental footprint becomes a big concern for a majority of the population, especially for youth, “sports events must take action if they want to continue to attract their audience and host cities” says Yoan Noguier. To an even greater extent, sport events depend directly on a healthy and stable environment: air pollution, heatwaves, floods are threatening the ability of some cities and countries to organize such events.

Do you like this article? Share it with your friends!
Previous article
View all news (377)
Next article